Book 4 of The Janet Maple Series 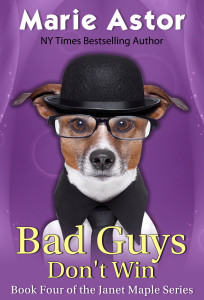 Not only are Janet Maple and Dennis Walker great at catching the bad guys, they’re also crazy in love and engaged to be married. But the duo’s perfect wedding plans hit a snag when a closed case comes back from the dead, pulling Janet and Dennis into a dangerous assignment.

Mila Brabec has rebuilt her life from scratch. She’s now a proud co-owner of a trendy Manhattan bar and has a dashingly handsome man on her arm. When her business is burnt to the ground and a terrifying note is found, Mila turns to the one man she knows can help her—Dennis Walker.

Will Janet and Dennis be able to stop the bad guys and have their wedding cake?

*Bad Guys Don’t Win is book four in the Janet Maple Series. Each book in the series can be easily read on its own.*

What the readers are saying:

“I was in suspense, in awe, in love and in tears!! I would love a book five to see what other adventures Marie Astor takes us on. I highly recommend this series!”

“Don’t miss out on this thrilling fast-paced mystery!  Bad Guys Don’t Win is the fourth book in Marie Astor’s series featuring Janet Maple, Dennis Walker and their lovable dog, Baxter. There are many twists and turns that will keep you on your toes!”

“This was a first time read for me in this series and I truly enjoyed it. I really recommend this author and series.”

Get your copy at: