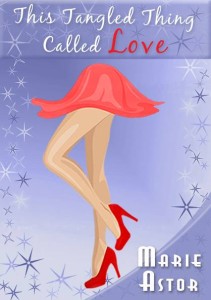 Claire Chatfield has everything a girl could possibly wish for: looks, a promising career, and an engagement ring from one of New York’s most eligible heir-bachelors! Life should be a dream and yet, it does not feel like one… When an enigmatic new neighbor, Alec Brunell, moves into an apartment above from Claire’s, Claire is surprised to find herself wondering whether the choices she has made in her life are worth following through.

In order to secure his place as his father’s successor, David Lawson must settle down with a wife befitting the future head of Lawson Enterprises – and who could fit the prerequisite better than the stunningly beautiful and incredibly bright Claire Chatfield? There is just one glitch – David Lawson is in love with another woman.

Alec Brunell has never lacked for women’s attention, but he finds himself at a loss when faced with his downstairs neighbor, Claire Chatfield. Still, her iciness only adds fuel to his fire, as Alec is determined to change Claire’s view of him.

This Tangled Thing Called Love is a love story about searching for one’s perfect match and finding the courage to follow one’s heart in the process.

“Marie Astor’s This Tangled Thing Called Love is smart, clever, moving, and surprising at every turn. Funny and wise, this is a tale of looking for that perfect partner in the modern-day world.”

“This Tangled Thing Called Love is full of passion, excitement, despair, lies, painful choices, and glorious new beginnings that will make you smile as the characters realize that love always triumphs if you allow it to!”

“This Tangled Thing Called Love has all the components of the contemporary romance genre – thrilling characters, whirlwind romance, and intrigue – prepare to be swept off your feet!”

Get Your Copy at:

Read an Excerpt from This Tangled Thing Called Love