Book 2 of The Janet Maple Series 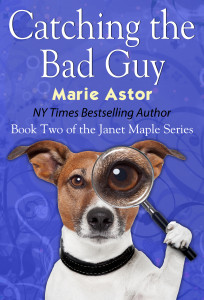 Janet Maple and Dennis Walker make a good team: she is a top-notch white collar crime investigator, and so is he. Both Janet and Dennis are thrown in for a loop when Janet’s treacherous snake of an ex-boyfriend, Alex Kingsley, is appointed as their new boss, and the case that was supposed to be the highlight of their careers is dismissed for lack of evidence.

To make matters worse, Alex is asking Janet to get back together, and the one man she wishes would ask her out sees her as nothing more than a coworker. Janet’s love life soon becomes the least of her worries, as she begins to suspect that Alex’s rekindled interest in her is driven by ulterior motives. She is determined to get to the bottom of things, but she can’t do it alone.

Together, Janet and Dennis team up to solve a tangled white collar crime web that leads to powerful politicians and corporate executives. Armed with their keen instincts and skills, Janet and Dennis are bound to succeed. There is just one glitch: both are attracted to each other, and both refuse to admit it. Will Janet and Dennis solve the biggest case of their careers or will their attraction to each other get in the way?

Catching the Bad Guy is book two of the Janet Maple Series, but it can easily be read on its own.

“Marie Astor delighted me with her mystery and romance. I rooted against the bad guys and cheered for the good as they fought for justice. Marie’s heroines are so real you want to sit down and have a drink with them and her heroes will captivate you. I can’t wait to see what they are up to in the next book!”
~ Kathleen Brooks, NYT and USA Today Bestselling Author

“A must read – I’ve been patiently waiting for this book and it was so worth it. The chemistry between Janet and Dennis is beyond nuts and their continual struggle against it makes this book so great. I really enjoyed the suspense, the charm, and the romance.”

“Marie wrote a top notch book in the first of this Series: To Catch A Bad Guy, and she made my day when she continues the story of Janet Maple and Dennis Walker. You’ll love the intrigue and adventure and of course the Romance.”

“I’m officially addicted to these books.”

“This series gets better with each book. The author keeps you on the edge of your seat. The plot twists keep you guessing and wanting to read more.”

Read an Excerpt from Catching the Bad Guy