Book 2 of the Sinful Business Series 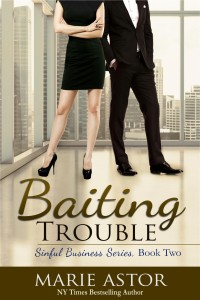 Allyson Roberts has risen from the ashes. She now has a career, a relationship, and a purpose in life. But as a new assignment comes along, Jake Morrissey, the man who helped her rebuild her life and has been her rock ever since might now become too dangerous for her to love. Will Ally and Jake find a way to be together, or will they bait trouble?

Delilah Jones has always been the odd one out with a wayward past. Now, she has a chance to shine by completing an undercover assignment that has her colleagues at a standstill. But what if getting a lead will cost Delilah her only chance for true love? Will she have to choose between her heart and career, or will she find a way to have both?

“I am NOT one to give spoilers but I would say. This is an amazing read. The twist, turns, choices, and supporting cast WOW moments. Yeah just go 1-click and get hooked.”

“You can feel the danger. Lots of twists and turns in this romantic suspense, you definitely NEED to grab a copy and read this book!”

“This is Marie Astor’s second book in the series and I continue to enjoy the story!!! Ally and Delilah make a great partnership in fighting crime!!”

“This is a great addition to the series. It drew me in from the very first page and kept me engaged till the very last page. I love how the characters are continuing to develop and grow. And, while I love Ally and Jake, I really enjoyed seeing how Delilah has grown and changed.”

“Full of action, thrills, romance. I hope there is another story in this series. I love it.”

“Surprise and suspense around every corner….romance mixed in. Love the characters! Great series! Can’t wait to see what twisted thing will happen next! Thanks for another awesome read! Looking forward to book 3!”

Get your copy at:

Read an Excerpt from Baiting Trouble