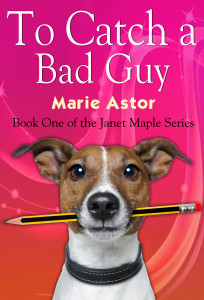 Janet Maple’s stellar career ended with a lay off and her boyfriend of almost five years told her that he wants to be just friends. When she lands a job at one of New York’s premier boutique investment firms, Janet begins to hope that her luck is finally turning for the better. Not only is she happy with her new paycheck, but things also seem to be looking up on the personal front, as the company’s handsome attorney expresses keen interest in Janet. However, her euphoria is short-lived, as Janet soon discovers alarming facts about her new employer’s business tactics. When her boss dismisses her suspicions as groundless, Janet finds herself confiding to a cute IT engineer, Dean Snider. The closer she gets to Dean, the more Janet is tempted to break her rule of not dating co-workers, but what she doesn’t realize is that everything she knows about Dean, including his occupation and even his name, is a lie.

Dennis Walker is a top-notch white collar crime investigator who will stop at nothing to put culprits away. When an opportunity for an undercover assignment at one of New York’s premier boutique investment firms comes up, Dennis jumps at the chance, adopting a persona of geeky IT engineer, Dean Snider. While he may be an ace at his job, years of experience fail him when Dennis meets Janet Maple and finds himself torn between his professional obligations and his personal desires. Will he have to choose between his feelings and duty, or will he find a way to satisfy both?

What the Readers are Saying:
“The author does a great job of engaging the reader with a fast-paced storyline full of intrigue, suspense and romance. I look forward to reading the second book in the Janet Maple Series.”
~Jersey Girl Book Reviews

“If it’s one thing I love, it’s a good mystery novel. I thought To Catch a Bad Guy had all the elements of intrigue, and it was hard for me to put this down!”
~Chick Lit Plus Reviews

“I enjoyed this book very much it has a hint of romance, mystery and is just a little bit sassy, making it a great read.

“Another wonderful read from Marie Astor! To Catch a Bad Guy is a wonderfully entertaining read filled with romance, suspense, and intrigue that will keep you turning the pages.”

Get Your Free Copy at:

Thirsty for Payback, Book 1 of the Sinful Business Series

In a blink of an eye Allyson Roberts loses her fiance, her employment, and her fortune. Just when she seems to have hit the bottom, Ally is recruited by an undercover agency that is interested in her skills. She takes the job with only one goal in mind: payback. Getting even is the only thought on her mind as she convinces herself that her heart has no room for love–or does it?

A former top agent in his field, Jake Morrissey has inner demons he can’t put to rest. Now he bides his time as a training instructor. He’s sworn off women, but try as he might he can’t keep his eyes off Allyson Roberts. When he’s asked to partner up with Ally on a new assignment, Jake is tempted to end his retirement. Will he keep running from his fears or will he find the strength to become the man he once was?

What the readers are saying:

“Highly recommend – a must read suspenseful romance – hot and funny. Ally seems to have it all when the story begins – family, friends, fiancee, prospective jobs, no worries of money. Then in a flash ALL is gone. A story of being patient, finding truths and accomplishing goals.”

“Great start to a new series. I was captured right from the beginning of the book. I enjoyed the suspense and the story line. I laughed out loud at a few parts. I thought Delilah was hilarious! The romance was hot, the suspense kept me turning the pages, and I couldn’t wait to find out if Ally & Jake were going to get together!”

“I can’t wait for book 2 to see what happens next and I’ll definitely be recommending this series to my friends. Great job Ms. Astor.”

“Loved the fact that even though Ally was going through so much it didn’t stop her from trying to find out who was behind her father’s companies downfall. I also couldn’t wait to find out if Ally and Jake got together. Really looking forward to the next book in this series.”

Get your free copy at: